Grab a signed copy of Devi’s entertaining, award-winning glossary The Language of the Blues: From Alcorub to Zuzu (Foreword by Dr. John) at Bluescentric.com. Also available as an eBook. 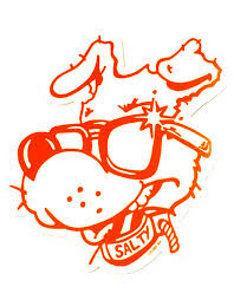 In blues songs like “Salty Dog,” and “Candy Man,” the salty dog is someone who wants to have sex without taking on the responsibility or restraints of a love relationship. In “Candy Man,” the Reverend Gary Davis sang about a woman who told him:

The song “Salty Dog Blues” is a folk song from the early 1900s. The earliest known recording is from 1924, by influential bluesman Papa Charlie Jackson.

In the “slang gets grosser over time” department, Urban Dictionary reports that a salty dog is “the act of having sex with one girl, and then meeting up with another shortly after and having her perform oral sex.”